YOU HAVE (0) ITEM(S) IN YOUR CART. CHECKOUT NOW
Women At Risk
X
X 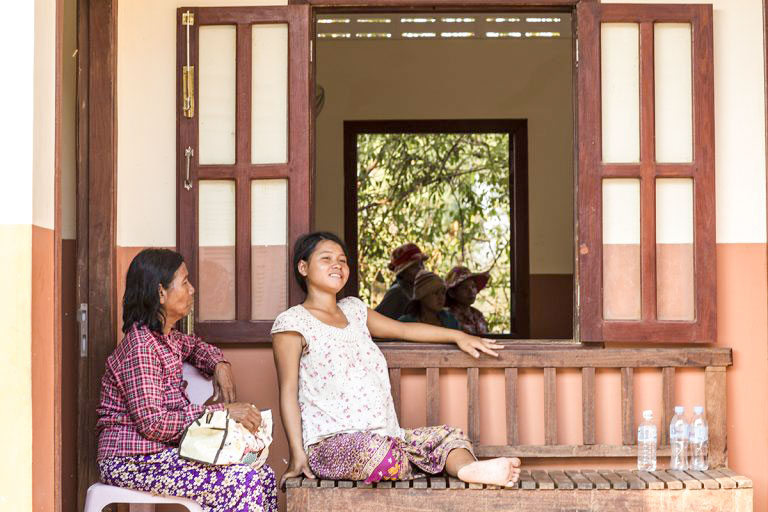 Her lips were chapped and stray strands of hair from her ponytail swept across her forehead. She grimaced with nearly every step, and eyes that hinted of worry and fear looked into the distance. Physical pain and the brutal Cambodian heat proved almost an unbearable combination for this 18-year-old expectant mother.

Sokny had arrived at the Samaritan’s Purse community birthing center that morning and was due to give birth to her first child any day.

Despite her physical agony in those anxious hours awaiting delivery, Sokny could do her waiting at the birthing center, giving her more hope for a safe delivery than most women in Kratie Province have ever known. It’s a hope that until a few years ago was all but forgotten in the remote, impoverished province hundreds of miles from a city or a hospital.

It’s not uncommon for mothers in Kratie to have one or two children die because they lack access to basic obstetrics and healthcare. When mothers in Kratie’s rural villages give birth at home, medical complications put them and their babies at risk.

Samaritan’s Purse is helping meet the needs of mothers in Cambodia, one of the poorest nations in the world with one of the highest infant mortality rates.

During the past two years, we built seven community birthing centers in Kratie to offer women like Sokny an accessible, safe place to deliver their babies. We’re also teaching mothers how to cook nutritious meals so their children do not get sick or die from malnutrition.

As we go throughout Kratie we go in Jesus’ Name, sharing the hope of the Gospel with mothers and families.

The centers also offer simple luxuries that mothers in Sokny’s village don’t have such as clean water, electricity, and fans. Sokny can stay at the center overnight or for several days, which wouldn’t have been possible at a hospital.

Sokny was eager to show off her newborn son as she tenderly cradled him, carefully adjusting and re-adjusting his hat and blanket. Before the community birthing centers, giving birth at a facility outside their poor village was an elusive dream for most women in Kratie. With your support, this dream has become reality for Sokny and others. 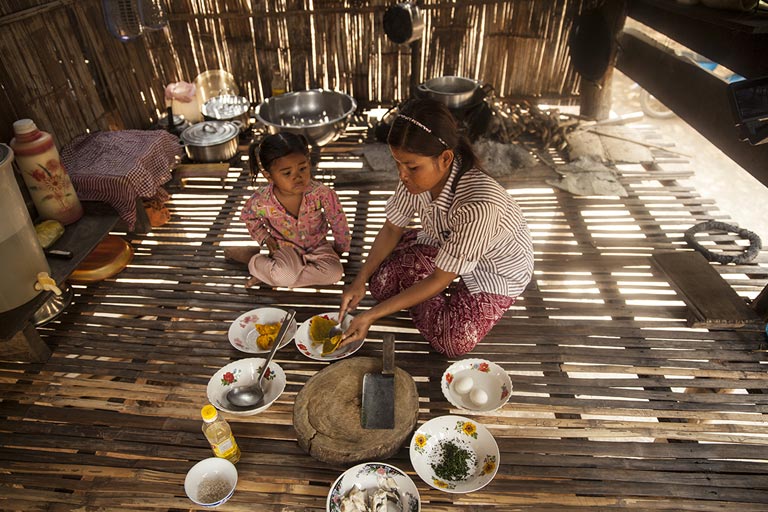 Samy, 29, met Samaritan’s Purse staff a year ago during a nutrition screening in the village. When we found out her 4-year-old daughter, Sekat, was malnourished we taught Samy how to cook nutritious meals that included proteins and vegetables.

"We teach mothers to give their children three meals a day, and not just rice," said Samaritan’s Purse staff member Suy Dalai.

Samy didn’t know why Sekat wasn’t gaining weight. Mothers in Kratie usually think it’s because of an evil spirit or another health condition; they don’t connect it with malnutrition.

When Dalai visits mothers she teaches them about malnutrition, as well as good hygiene and how to take care of themselves and their babies.

Most importantly, she brings the Good News.

"When I visit I share the Gospel," Dalai said. "I want them to know Jesus."

Before Dalai came to her home Samy didn’t know about Jesus, but now she believes and trusts in Him.

"Samaritan’s Purse staff helped me understand that Jesus can have power over demons," she said. "I believed in Jesus because Satan’s power cannot control my life. The power of Jesus Christ can cast out demons and that person can now be free."

Rehabilitation for Women in Sri Lanka

Jamila is a widow with two children. She sadly lost her husband as a result of the war. Due to mysterious circumstances about his death Jamila was unable to obtain any support from the government. Ever since her husband’s death Jamila was constantly harassed by unknown armed men, this was a regular occurrence for many women who had lost their husbands in the war and now who were a single female household.

In order to earn a living Jamila was doing odd jobs, but this was not sufficient in order to support her family and she was tired of constantly being troubled. As a result, Jamila was forced to leave her two children with her old mother in search of hope to find a job abroad. She found a job abroad through a sub agent as a domestic helper. She provided the agent all her paperwork and documents and he took her to another city, from where they would be sent abroad to start her new job. Sadly, Jamila ended up in a home in another city and was put in a house with 9 other women in very destitute situation and was basically trapped.

Jamila eventually realised what was happening when she was not allowed out of the house and did not even know what city she was being held in. She was never sent abroad and was abused by the sub agent and forced into prostitution. The sub agent used other men to terrorise the females in the house from leaving. After 6 months of misery Jamila and another female escaped with the help of a customer who was a truck driver from north. The truck driver dropped them at a Local NGO who then referred them to Samaritan’s Purse. There are many such highly influenced sub agents in the former war zone targeting female headed households.

Through Samaritan’s Purse Jamila is now in the process of rehabilitation. She has shown great interest in clay pottery. She had attended some vocational training and developed some skills when she was younger before her marriage. She was given training on new tools in clay pottery such as how to use power pottery wheels. She and her two girls and her elderly mother were reunited and resettled into another community. Her kids are the happiest of them all. They only know that their mother returned from abroad.

Samaritan’s Purse trainers helped her to find a buyer who is buying all her potteries for traditional curd packaging. Demand for these clay pots is high and we are currently training two more females to make these clay pots. Jamila’s average monthly income is around 30,000 LKR which is three times the amount she could receive through social welfare. Her two Girls are attending Sunday school and Jamila and her mother go to the local Church.

We are praying they will accept Christ soon.

LIGHT for Women in Liberia 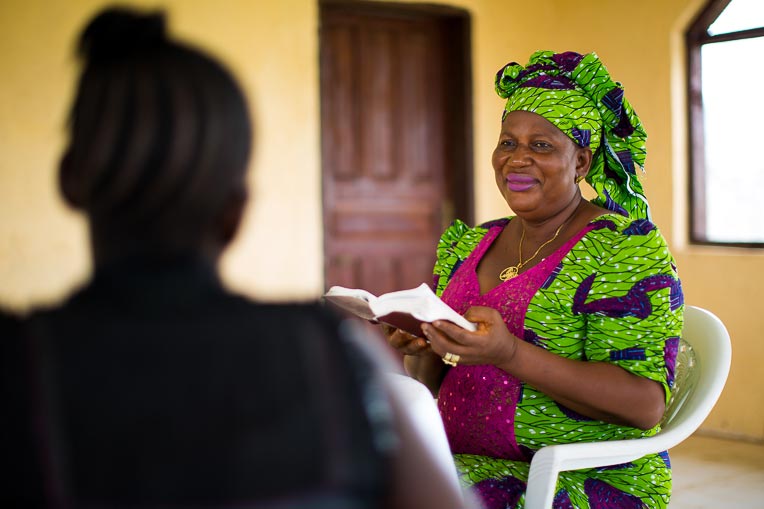 In Liberia, as many as 85% of women and children have been victims of brutal domestic violence.

To combat this disturbing practice, Samaritan’s Purse has begun training religious leaders in Liberia through a program called LIGHT, named for John 8:12: "Then Jesus spoke to them again, saying, ‘I am the light of the world. He who follows Me shall not walk in darkness, but have the light of life."

The project uses a Biblically based approach to counter the culture of domestic violence. Because religious leaders are highly respected in the community, people are more willing to listen when they speak about the need to love and protect women and children. Praise God, we are seeing a tremendous transformation— even in areas where Christians are a minority. In one village, a local Muslim imam said, "I have seen the change in my community, and I want Samaritan’s Purse to bring more programs here."

Although the training is helping to stem the tide of abuse, many women and young girls continue to fall victim to rape, domestic violence, and abandonment. The Liberian justice system works slowly, if at all, and women who have been victimized often aren’t safe staying at home while their abusers are still free to hurt them again. Their families may also not want them back because they feel ashamed.

In 2005, a woman affectionately known as “Ma B” opened a safe home, supported by Samaritan’s Purse, for abuse victims to have a place to recover from their physical and emotional wounds. Girls as young as 7 have found refuge at the home, where they receive loving care, educational opportunities, and medical help for their injuries. Most importantly, they are told about the true peace and healing that can only be found through the Gospel.

One 12-year-old girl, Patience (name changed for protection), was raped while walking home from a dance. The perpetrator threatened her life if she told anyone what he had done. Alone and afraid, Patience isolated herself from her family. Realizing something was terribly wrong, her mother took her to the local church for prayer, and the girl finally opened up about what had happened to her.

When the police found out about Patience, they immediately contacted Samaritan’s Purse. Our staff went to her village and took her to a local hospital for medical care. Because of the violence she had endured, her health had severely declined, so we flew her to a hospital in Liberia’s capital, Monrovia. She required six blood transfusions before she began to improve.

When it was time for Patience to return home, her family faced a dilemma. Her perpetrator remained free, and her village was far away from the kind of medical care she still needed to fully recover. Our staff reached out to Ma B, who happily accepted her into the safe home.

While there, Patience made a full recovery. She learned Bible verses and stories that reinforced the message of God’s unconditional love and the hope of eternal life through Christ. “I’m very happy and grateful,” said her mother. “They have been praying and using the Word of God.”

GOD IS IN HER MIDST, SHE WILL NOT FALL

We believe all women and girls should have the opportunity to survive and thrive leading healthy and dignified lives. Yet women all over the world face the dark reality of abandonment, exploitation and abuse.

Every 90 seconds, a woman dies during pregnancy or child-birth.

By giving pregnant women and mothers of newborns in remote and impoverished communities vital healthcare and knowledge we’re saving the lives of women and their babies.

She is protected and restored.

Up to 800,000 people are trafficked across international borders every year. 80% are women & children.

We’re providing hope in Jesus’ Name by caring for victims of exploitation and sex trafficking, and by educating the vulnerable to shield them from its traps.

1 in 3 Women are raped, beaten or abused in their lifetime.

By equipping church leaders to support, counsel and rehabilitate victims of sexual gender-based violence and teaching men and women how to live together in a God-honouring way, we can give women a life free from abuse.

"She is clothed with strength and dignity, and she laughs without fear of the future." Proverbs 31:25 (NLT)

Our heart is to protect and empower women to live without fear or limitation, and to become all that they were created to be.

There’s so much more to be done! With your help we will continue to honour vulnerable women and children so they can be safe, protected, restored and free.