WE ARE DISTRIBUTING FOOD AND HYGIENE SUPPLIES TO FAMILIES IN THE PHILIPPINES IN THE WAKE OF SUPER TYPHOON MANGKHUT.

A Samaritan’s Purse team in the Philippines is distributing emergency food packs and hygiene kits to families in need after Super Typhoon Mangkhut slammed into the Philippine island of Luzon on 15th September.

The typhoon made landfall with winds up to 165 mph (equivalent to a Category 5 hurricane), killing more than 80 people in the northern Philippines, many from landslides in mountainous communities. Dozens of others are missing and presumed dead in Benguet Province from a landslide at a mining camp. The powerful typhoon destroyed countless homes, leaving residents in the hard-hit Cagayan Province to seek shelter with family and friends.

Our team in the Philippines has provided packs containing rice and other basic food items to nearly 800 families, representing almost 4,000 individuals. Local church partners are helping to procure food, pack the items and make logistical arrangements.

RUNNING OUT OF FOOD

“If you had not come, we would not have anything to eat tonight,” said a 72-year-old woman named Rosemarie. She and eight family members, including her infant grandchild, are staying at a neighbor’s house after the fierce typhoon winds destroyed their roof.

Natalia’s roof weathered the storm, but her home’s walls did not. “I was so scared while the typhoon pounded on us,” said Natalia, 69. “My arms are sore now from pulling on the ropes to tie our roof down. The roof held, but the winds were so strong that it destroyed our walls.”

Grateful for a food pack, Natalia said that her family had almost run out of food from what they had stored from their harvest in June. 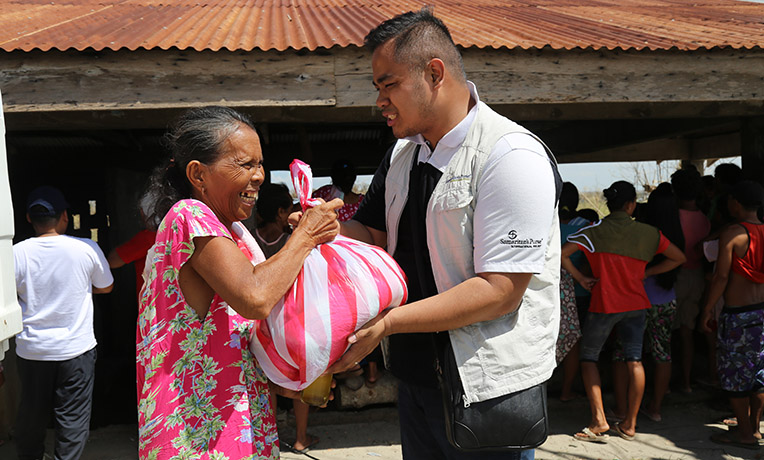 The typhoon destroyed crops in the northern Philippines just as they were ready for harvest this month. Agriculture and fishing are the main livelihoods. The typhoon hit after nearly a month of monsoon rains that had already loosened the soil, resulting in landslides.

Pilar, 88, had rebuilt her home after a typhoon years before, using her late husband’s limited pension to pay for repairs. During Super Typhoon Mangkhut, Pilar took refuge at her son’s house after her home sustained severe damage. “I did not want to leave my house, but my son forced me to go,” said Pilar. “He said, ‘Mother, leave the house. We can’t do anything about it.’ I could not do anything else but pray to the Lord.”

Pray for the victims of Super Typhoon Mangkhut and for families who are grieving the loss of loved ones. Pray for our local staff and our church partners as they continue to help families in need in their communities.