God used prayer and Operation Christmas Child shoebox gifts to help reconcile a believer to his estranged Muslim family. Today he is no longer the only Christian among them!

Ibrahim* grew up in a rural village in Burkina Faso. The local community highly respected his family because his father served as their imam, or Islamic leader. Ibrahim learned to recite the Koran as a child, and, every afternoon after school, he gathered firewood that provided light for the nightly reading of the Muslim scriptures.

He and the members of his family belong to the Fulani ethnic group—an unreached people in West Africa. Ibrahim first met Christians at his school, and they shared with him the Gospel of Jesus Christ. In time, he decided to follow Jesus too. His family, however, was unaware of his decision. 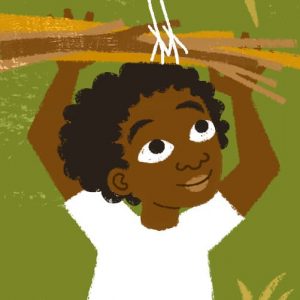 That same year, Ibrahim finished primary school and went to live with another family in the capital city in order to continue his studies. In this new location, he was able to attend church in secret. But when his host family realized he was following Christ, they banned Ibrahim from their home, and also informed his mother and father of his decision. Ibrahim fled for his life to the southern part of the country where he managed to continue his high school education and found work ironing clothes.

Through one of his customers, Ibrahim learned about a training centre where believers are discipled and trained in vocational skills. He enroled and participated in the programme for two years, during which God led him in the important work of forgiving his family. In addition, he and a missionary named Adama*, who was also a Fulani, began the long process of seeking reconciliation with Ibrahim’s family. After some degree of negotiation, the family said they were willing to see him.

The day Ibrahim and Pastor Adama set out to make the visit, their church prayed for them. Hoping for a good reception, the church also sent them off with three cartons full of Operation Christmas Child shoeboxes as a gift to the children in Ibrahim’s extended family. Each carton held about 20 boxes.

“We are grateful for the part the shoeboxes played…”

As the two men approached Ibrahim’s village, many things appeared different. Ibrahim discovered buildings that hadn’t been there before, and what had been the old road was now just a field. After asking for directions, they eventually found their way to Ibrahim’s home where he was warmly received by the younger members of the family. They were so excited; they hadn’t heard about him in years!

“His mother was overcome with joy and had to hide in the hut as she was in tears,” said Pastor Adama. Ibrahim’s father, however, was nowhere to be found.

Dozens of children continued to gather to celebrate Ibrahim’s homecoming, so he and Pastor Adama asked permission to distribute shoebox gifts to them. The boys and girls as well as their parents were overjoyed by all the treasures they contained!

“The tension in the atmosphere dissipated,” noted Pastor Adama.

“After an hour or so, Ibrahim’s father came home on his bicycle. Ibrahim was still feeling nervous. His father greeted us, and then entered a hut where he was followed by a few elders. When he came out, he came to greet us again. He didn’t speak much, but he did publicly welcome Ibrahim into the family again.”

The father then noticed the joyful celebrations among the children in his courtyard, and thanked Ibrahim and Pastor Adama for bringing the shoebox gifts.

After a meal together with his family, the pair was planning to leave when 30 more children arrived. Sad to have missed out on the gifts, the youngest ones in the group were in tears.

Ibrahim quickly offered to return soon with more Operation Christmas Child shoeboxes for these who hadn’t received one. He came back on his own two days later with more boxes and stayed in his village two weeks.

“We are grateful for the part the shoeboxes played in this reconciliation process,” Pastor Adama said. “Now, Ibrahim is well accepted in his village.”

“These materials became their main reading primer, the main resource to improve their literacy.”

Along with the shoebox gifts, Pastor Adama and Ibrahim gave his younger siblings, nieces, and nephews discipleship materials in French.

“These children have very little reading material of their own,” said Pastor Adama, “so these materials became their main reading primer, the main resource to improve their literacy in the national language of French since their tribal language is only used locally.”

Since then, several of Ibrahim’s nieces and nephews as well as his adult cousin have also become followers of Jesus Christ. Pastor Adama is grateful to God for the role Operation Christmas Child is playing in evangelism and discipleship efforts among the Fulani. The kingdom of Christ is growing!

Read more about how Operation Christmas Child is taking shoebox gifts and the Gospel of Jesus Christ to the ends of the earth.