A mobile team is offering medical care in Buzi, now surrounded by water. Soon our Emergency Field Hospital will be established there.

About three weeks after Cyclone Idai hit Mozambique, the situation on the ground is still dire. Catastrophic flooding and high winds left historic devastation across the east African nation. Tens of thousands of people remain displaced, food is scarce, clean water is limited and reports of cholera and other waterborne illnesses are already making headlines.

Some areas remain flooded. Buzi, a rural town in Mozambique, was entirely under water as a result of Cyclone Idai. Now it is only accessible by boat or helicopter. This makes getting relief and supplies to these desperate families extremely difficult. 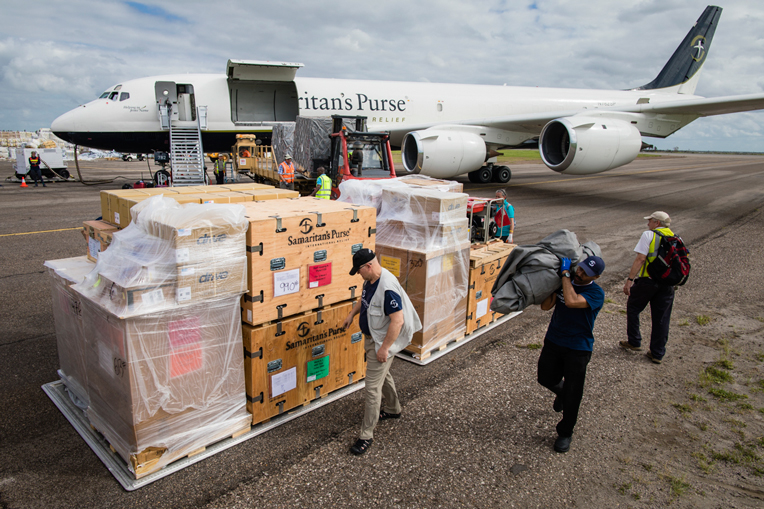 Samaritan’s Purse is setting up an Emergency Field Hospital in Buzi, Mozambique, where Cyclone Idai caused severe damage and injury. In this photo, materials for the hospital are being unloaded off our DC-8 in Beira.

Samaritan’s Purse is on the ground in Buzi preparing to open an Emergency Field Hospital at the request of the Mozambique Ministry of Health. Our DC-8 plane arrived in country on Friday 29th March, carrying the materials for the hospital along with a community water filtration unit, nearly 2,000 jerry cans and other critical supplies.

Already Samaritan’s Purse has been deploying a three-person medical team to the cyclone-created island each day. The needs are so great that every day counts. This mobile medical care is filling the gaps as we stand up a larger emergency medical response.

Caring for the Hurting

The local hospital in Buzi was severely damaged in the storm and admitted patients went five days without any care. The Samaritan’s Purse Field Hospital, augmented with surgical capacity for C-sections, will relieve the burden of care from the local facility so that they can focus on rebuilding. 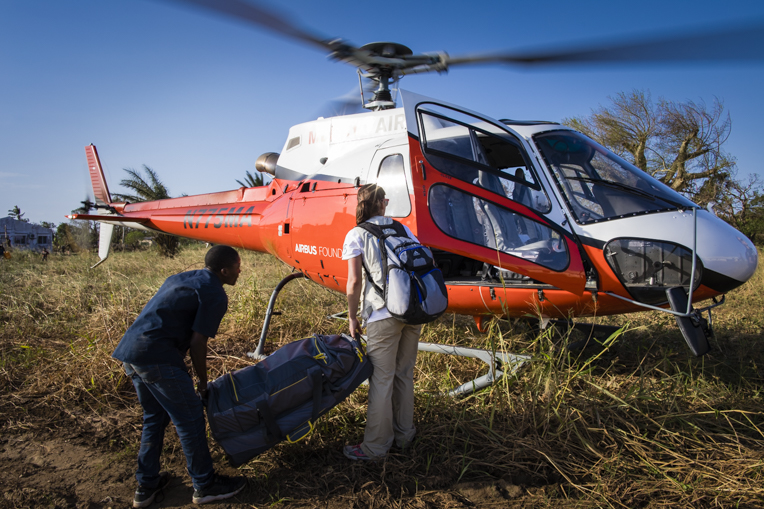 Our teams are flying medical supplies and equipment to areas cut off by flooding.

Agusto Americo was one of the first patients the Samaritan’s Purse mobile medical team treated. He received a deep laceration to his foot when a piece of metal roofing fell on top of him.

Wounds from the cyclone are at a higher risk of infection due to contaminated flood waters. When his home collapsed during the cyclone, he spent 42 hours in the water before being rescued in a boat. He came to the clinic to have his foot cleaned and bandaged as it was already infected.

These harrowing stories are not uncommon in Buzi. Juliet Luise, also a patient who received wound care from us, said that she climbed on top of her roof as the floodwaters rose. The high winds and rushing water caused her house to give way, thrusting her into waist deep water. She swam to her neighbor’s house and climbed up on the roof with them, but soon it also collapsed. Three times Juliet took shelter on a roof top only to have the house crumble beneath her. 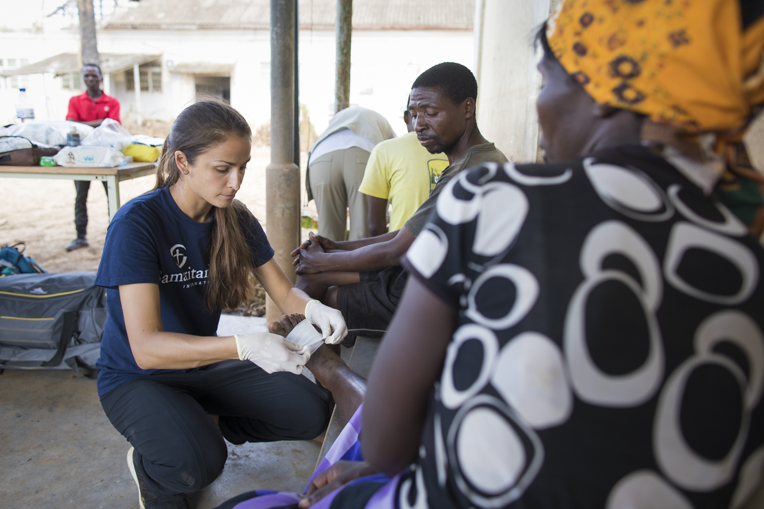 Jessica Lutz, a Samaritan’s Purse nurse, cares for Juliet Luise, a widow. her foot was cut during the cyclone by roof metal. “We are so grateful for Samaritan’s Purse. We thank you so much for coming to visit us and give us medication.”

“I was so afraid. I thought that I would die,” Juliet said. “I am so grateful. Thank you so much for coming to Buzi to care for us.”

Samaritan’s Purse is pairing medical care and relief with offering the hope of the Gospel. Stephanie Morales, a physician’s assistant, said her prayer is that every patient feels God’s love through the way they are treated.

“I want them to know that they matter, that God loves and they are so important to him. This is not the end,” she said.

In addition to medical care, Samaritan’s Purse has distributed emergency shelter material to thousands of families, rehabilitated several wells and will soon be distributing food parcels in coordination with the World Food Program.

Continue to pray for Mozambique and the dozens of disaster assistance response team members who are providing lifesaving relief in the aftermath of the storm.