The disease causes massive internal bleeding and has a mortality rate of at least 80 percent in most situations. In response to this resurgence, Samaritan’s Purse has deployed a team of medical personnel to provide direct clinical care to those infected with the disease.

“This is one of the most deadly diseases in the world, and it must be contained as quickly as possible,” said Franklin Graham, President of Samaritan’s Purse. “We’re sending a team of highly skilled doctors and nurses, and we want to do all we can to help bring this outbreak under control.”

Samaritan’s Purse has been responding to the Ebola crisis in Liberia since March, spearheading a national awareness campaign that has reached hundreds thousands of people with prevention education and hygiene items.

Samaritan’s Purse is working in cooperation with Liberia’s Ministry of Health, the U.S. Centers for Disease Control and Prevention, United Nations agencies including the World Health Organization, and other non-governmental organisations to provide life-saving care for patients in multiple locations – ELWA Hospital near Monrovia and clinics in remote areas along the border with Guinea.

At ELWA, a new, larger case management centre funded and constructed by Samaritan’s Purse can accommodate 20 confirmed patients and 10 suspected cases of Ebola. Several Samaritan’s Purse medical personnel are working alongside other hospital staff to treat patients at this facility. All medical staff there, including nurses, technicians, and a local doctor, have been trained in safety protocols. 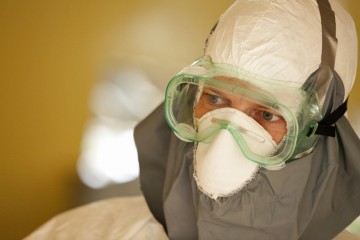 Medical personnel must wear protective gear to work with patients

Nurse Kelly Sites, a disaster relief team member, has been providing care for Ebola patients at ELWA since late June. “Today I went in with one of my patients who I’ve had for about four days, and I gave her a bath in her bed and did a lot of other care for her,” she said. “She stopped, and we held hands and she looked into my eyes today and said thank you so much for being my friend. She told me that she loved me and she thanked me for caring for her. This experience has been one of the most rewarding of my whole career.”

Samaritan’s Purse also will be assuming responsibility for the Ebola case management centre in Foya District, Lofa County, Liberia, with an anticipated handover date from Doctors Without Borders on 8 July. Facilities will be expanded there, and the disaster relief team anticipates reaching out to assist smaller, ill-equipped clinics in remote areas of northern Liberia.

Samaritan’s Purse has aircraft stationed in the country that will support this emergency effort and has shipped medical equipment and supplies to Liberia, including protective clothing and lactated ringers solution. A second shipment arrived on 1 July and was distributed to the ELWA case management centre on 2 July and to the Foya centre on 3 July. A third shipment is en route.

Health care providers must don personal protective equipment in order to care for Ebola victims. Suiting up takes 30 minutes and the decontamination process can take another 30 minutes. Given West Africa’s heat and humidity – it’s the middle of the rainy season – workers should only stay in the gear for 60 to 90 minutes. The protective gear includes boots, a surgical cap, a Tyvek suit, two sets of gloves, a “beard” to cover the neck and chin, a facemask, goggles, and a waterproof apron. 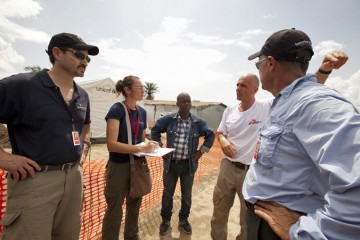 This Ebola outbreak is unprecedented in terms number of infections and deaths. The situation is particularly complex and challenging because of porous borders between the three currently affected countries (Liberia, Guinea, and Sierra Leone), weak infrastructure and health care capacity in the area, and the fact that cases have been confirmed in large metropolitan centres.

“There’s no magic bullet for Ebola,” said Dr Plyler. No commercially available vaccine for the disease currently exists, though great progress is being made on that front, he said. Supportive care for patients – including fluid and electrolyte management, proper nutrition, antibiotics, etc. – does have the potential to reduce mortality rates. “What will contain the outbreak is what we’ve been doing all along,” Dr Plyler said, emphasising the importance of proper hygiene and public understanding of the virus.

Transmission of the virus to humans likely occurs through contaminated bush meat. It then spreads from person to person through contact with bodily fluids. Casual contact, say a sweaty handshake with an infected individual, can lead to infection. Unprotected health care workers are at great risk. Traditional burial practices in West Africa also seem to be contributing to the spread of Ebola. Many people in the affected region remain in fear or denial regarding the disease.