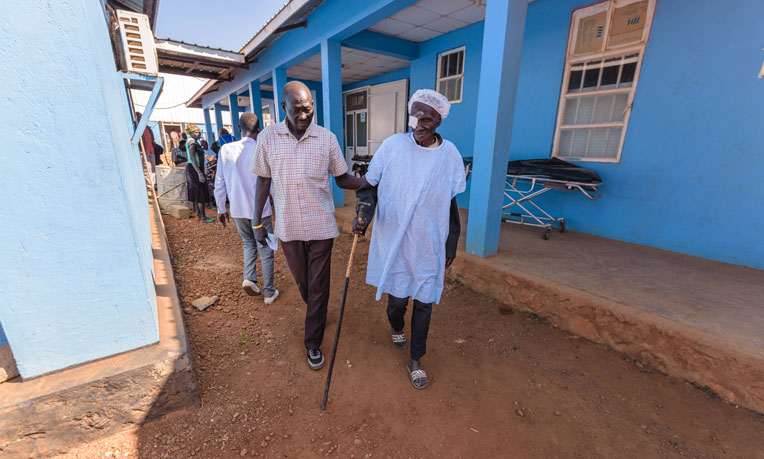 Yinat’s vision deteriorated after a cobra spit in his eyes.

When Yinat went to his garden to gather sorghum he did not expect such an ordinary day would deal him such a dreadful incident. A spitting cobra lurking among the plants attacked and spit not once, but twice in Yinat’s eyes.

That was 20 years ago, and Yinat hadn’t seen well ever since. He developed cataracts and could see very little–and that only if the object was quite close to his eyes.

Restore sight to the blind

Yinat lives in a village in Maban County, South Sudan, where he is a nine-hour walk from the closest hospital. Yinat’s nephew John recently helped him make the trek there in order to meet a Samaritan’s Purse team of volunteer surgeons, ophthalmologists, and nurses. The team performed 237 operations during a cataract surgery campaign for patients without other options for surgery. 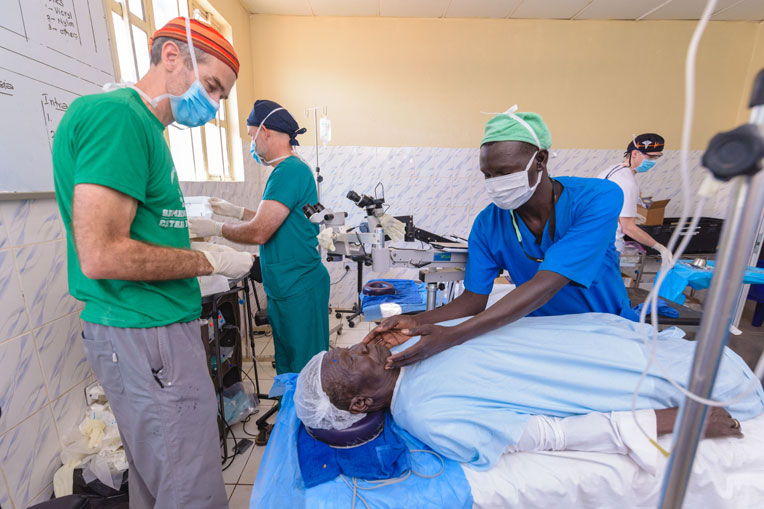 Our team performed 237 operations during the cataract campaign in Maban.

“There’s a huge need for eye care in this area,” said Dr. Dan Gradin, an ophthalmologist who helped perform the eye operations. “For people to get medical care on their own is very difficult. Most of the people we see are actually blind from their cataracts, so they really do benefit from surgery.”

Maban County Hospital in northeast South Sudan where the surgeries were performed serves about 200,000 people, of which nearly 150,000 are refugees displaced during the country’s many years of war and violence. The hospital, built and supported by Samaritan’s Purse, is the only full-service referral health facility in the entire region.

Yinat was delighted at the results of his operation. “I can see everything,” he said as he pointed to all the people around him that he couldn’t see the day before. 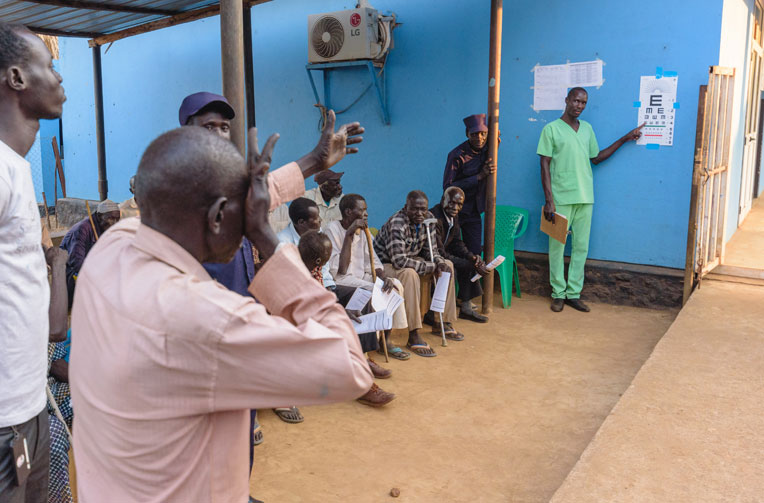 Screening patients’ vision before they meet with an ophthalmologist.

Poor vision hasn’t been the only hardship pursuing Yinat. Like most people in Maban, he struggles to find food. He’s relied on John to provide his meals since he’s been unable to work.

Yet, John has a large family of his own and “there’s not enough food in this area,” he explained. “Sometimes we endure a week without enough food.”

Recent flooding in the region has made the food shortage even worse.

“The flooding stole everything,” John said. Both Yinat and John’s gardens were flooded and so were their homes.

But they are not giving up, and now that Yinat’s vision is restored, they have more hope for the future than they have in a long time.

One of Chaka’s favorite things to do is cook, especially traditional food such as ugali, a porridge made from flour and corn, and chapati, an unleavened flatbread. 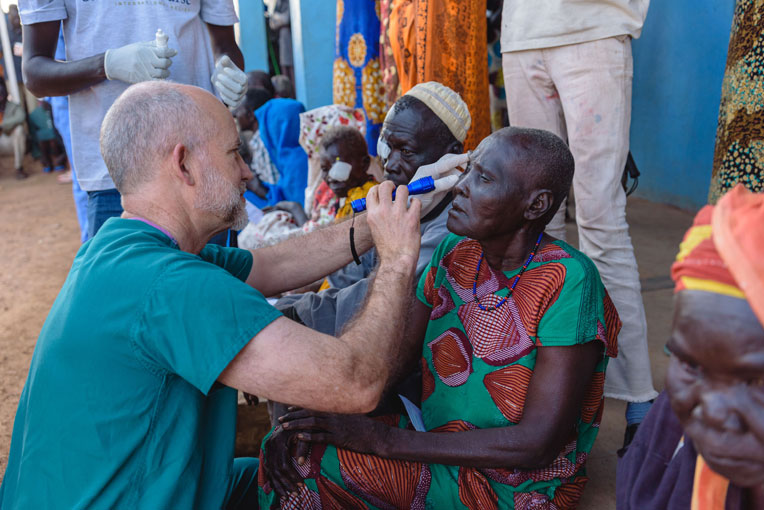 Chaka hasn’t been able to cook since her vision deteriorated several years ago. “I cannot see anything—nothing,” she said. “It looks like smoke.”

Chaka can’t collect wood from the forest to sell as firewood, and without a job or income, she must ask family and neighbors for food.

Relying on others is hard for Chaka because she wants to provide for herself. She is strong, persevering during the darkest of times. Years ago, when the war began in Sudan, Chaka fled to the northern part of the country with her two sons, ages 1 and 3 at the time. War prevented the family from returning home to Maban for more than 20 years.

Chaka and her son Shala are grateful for the team who came to South Sudan to restore sight to her and many others and give them a second chance at life.

“I appreciate you coming,” Shala said. “You are like the Samaritan who helped the man who was beaten—the Samaritan helped him.”

Dauti reads the Bible for as long as his eyes will let him, but eventually they hurt and tears blur his vision. “When I try to read the Bible I cannot see well,” he said. “When the water starts coming down, I stop.” 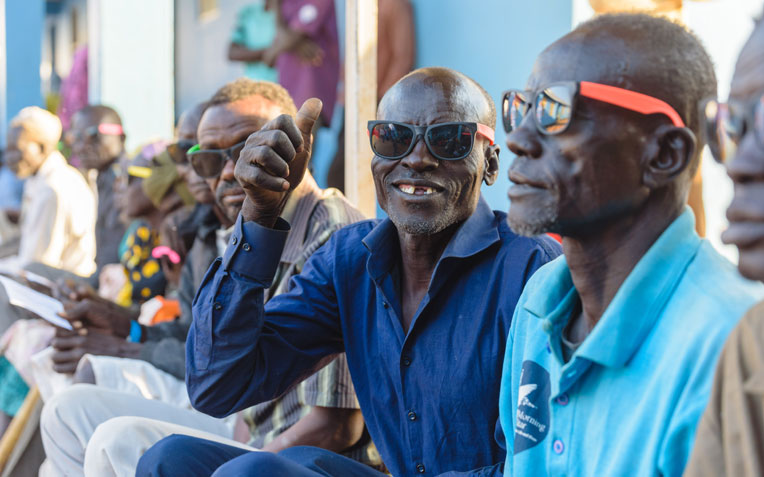 Dauti is looking forward to being able to read the Bible.

His family reads to him, but Dauti longs to read God’s Word himself, especially Luke and John, which are his favorite books of the Bible.

Being unable to see also prevents Dauti from farming his corn, pumpkin, and sorghum. Like Yinat, the recent flooding destroyed Dauti’s land and home, as well as the church where he teaches Sunday School.

“We built a grass roof hut for our home and our church is praying under a tree,” Dauti said.

Dauti only returned to his home last year after being displaced several years due to war. “It’s difficult to leave your home and move to another place,” he said.

But for a little while, as surgeons and nurses removed eye patches the day after surgery and examined the patients, Dauti seemed removed from all his troubles. He couldn’t stop smiling and giving our team a “thumbs up” when he realised he could see again.

Dauti said he knows why his vision has been restored: “God is helping us.” 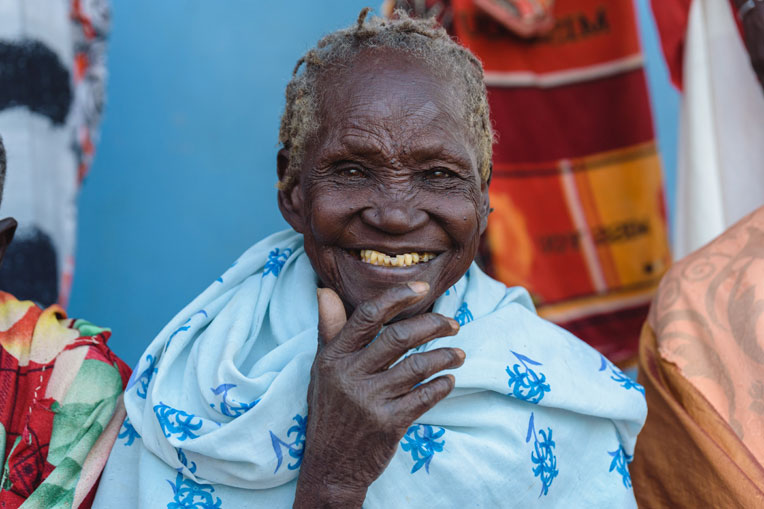 Please pray for the people in Maban County and throughout South Sudan who still need to hear of God’s love.

Restore sight to the blind