YOU HAVE (0) ITEM(S) IN YOUR CART. CHECKOUT NOW
Raising Families
Increasing the Harvest 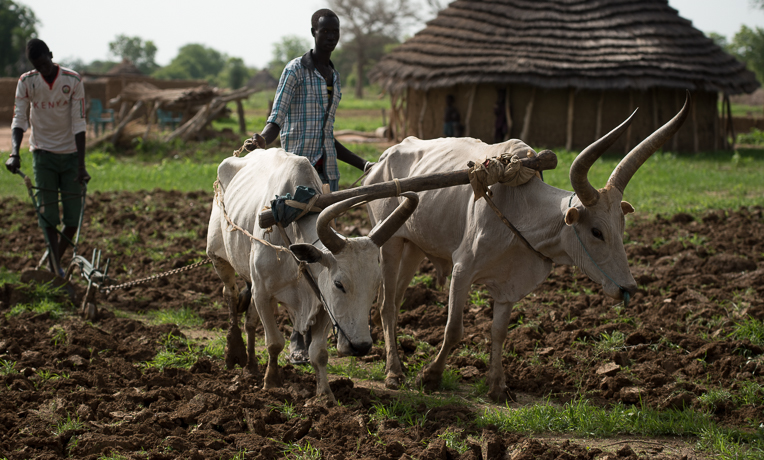 Samaritan’s Purse is training South Sudanese to farm and to fish and also providing emergency food aid to combat hunger until the new harvest comes in.

Sweating profusely in the sweltering South Sudan heat, Bul Bul Akol wiped his brow and leaned on his hoe. Using his crude hand tools, he had been working hard for weeks to get his 15 acres ready to plant sorghum, which is the staple of his family’s diet.

Bul looked heavenward and prayed: “God, I need help to get this done. Can you please send someone to assist me?” 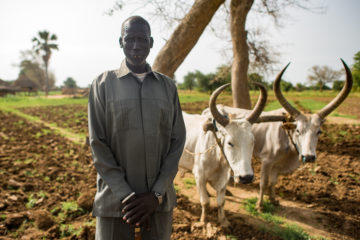 Bul Bul received a plow to help him cultivate his land.

A few days later, Bul’s prayer was answered when he met a Samaritan’s Purse staff member who offered him an ox plow to help him farm his land, located outside of Aweil, a city in the northwest part of the country.

“Won’t that [labor] hurt my animals?” Bul asked, referring to a misconception believed by many farmers.

“If you feed them well, not at all,” our manager replied.

Bul was overjoyed, and that ox plow made a huge difference! It took him only four days to plow a field that would have taken two months by hand.

“I thank Jesus for touching the hearts of Samaritan’s Purse to help me and give me what I need to farm my land,” he said. 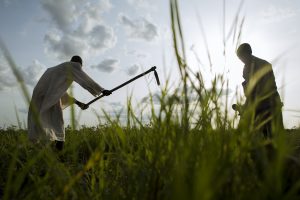 This hardworking farmer was so grateful that he didn’t want to stop plowing.

“God told me that this ox plow was not only for me, but I should be a Good Samaritan to my neighbors and plow their farms too,” he said.

He plowed an additional 19 acres to assist them.

Bul is but one of hundreds of farmers that Samaritan’s Purse is assisting in the Aweil area. For him, it was a plow that increased his harvest and lightened the burdens of his family.

For many others, we’re providing training in modern agronomy practices so they can increase the yield of their crops of okra, pumpkin, onions, tomatoes, sorghum, and tea. We’re teaching them how to plant and manage their crops, including the use of natural pesticides. We give each farmer a watering can while also providing them with vouchers that they can take to a trade fair. There they can choose which seeds and tools they need and purchase them with the vouchers. Samaritan’s Purse then pays the traders what those vouchers are worth.

“This process helps build up the local economy and encourages not only the farmers but also the traders,” said Tim Carter, Samaritan’s Purse deputy country director for South Sudan.

Regina with her fish

“I’ve been farming for five years, but before Samaritan’s Purse came, I was farming just with my hands and watering my few crops with a beat-up jerry can,” Majok said. “I’m thankful for Samaritan’s Purse because they gave me a good watering can and also enabled me to buy seeds. Without their help, I would not have survived this year. Now I have a good crop of vegetables.”

We’re also coming alongside local fishermen and women. Regina is one of them.

“They taught me how to properly fish and provided me the twine to make my nets and also the hooks,” she said, proudly holding up part of that day’s catch. “I’m now able to not only feed my family, but I can sell the fish and with that money I’ve paid for clothes for my seven children and also their school fees and medicine when they’re sick.”

Training is a big part of what we do. But we don’t just address physical needs. As God directs, we’re also meeting spiritual needs by introducing these farmers to Jesus—who often spoke the language of the farmer and the fisherman.

“Before Samaritan’s Purse, there were other organizations that taught us about farming and fishing, but I’m praising God because Samaritan’s Purse taught me about Jesus,” Regina said. “They told me about Him, that He can help me if I pray to Him. They also taught me the Word of God. Jesus has changed my life, and I am learning to know Him and to trust Him.” 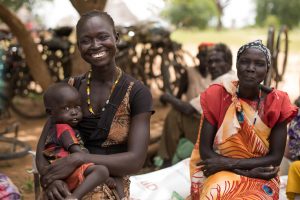 What Samaritan’s Purse is doing in northwestern South Sudan is critical. Not only are we equipping farmers for this year’s harvest, but we’re also conducting emergency food distributions to get people through the lean summer months. Last year’s crop shortfall has left people hungry.

“Many people are becoming desperate,” said Denis Okumu, Samaritan’s Purse program manager for food security and livelihoods in Northern Bahr el Ghazal. “Mothers are abandoning their children. Men are deserting their families and traveling back to Darfur in Sudan to be hired as laborers to work on farms, just to get food. So we’re targeting the most vulnerable and distributing sorghum and maize to help feed families through August until the next harvest.”

Rebeccah, a mother of three, is benefiting from these emergency food distributions.

“I walked a great distance to come here today to feed my three children,” she said. “If there was no Samaritan’s Purse to sustain us, I would not be able to survive and would not be here. So I thank God for the goodwill that the Samaritan’s Purse people have shown and am grateful they have supported our country.”

Raising Families trains and equips local Churches in Sub-Saharan Africa and Central Asia to transform the lives of families living in desperate poverty.

Church Action Groups teach vulnerable families that God can use whatever He has given them – gifts, skills, relationships, resources, land, time – to enable them to create a sustainable livelihood and bring about lasting change.