There is no suffering comparable to the tragedy created by an earthquake. In Haiti, there was the lady who sat on her bed in the hospital and just stared straight ahead for days. She had a broken leg, but that would not account for that look of despair on her face. As we made rounds on the patients, I asked the nurse for the lady’s story. “Her husband died. As well as her four children,” was the reply. I remembered 1 Corinthians 13:13 – “faith, hope, love … but the greatest of these is love.” I know that love is the greatest, but at times, when hope is lost, it can be the most terrible time in one’s life.

I was reminded of that as we walked through the streets near the epicenter of the recent 7.8-magnitude earthquake in Ecuador. Buildings were toppled. Automobiles were crushed. There was one particular building we stopped and looked at more carefully because there was a certain stench just in that area. The smell of death. I remembered it in Haiti and Nepal where Samaritan’s Purse had responded to earthquakes. And now, I could smell it again. 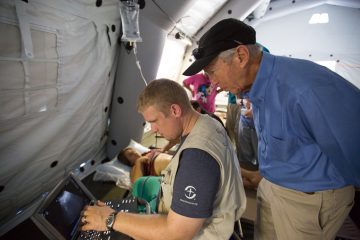 Doctors at work in the Samaritan’s Purse emergency field hospital in Ecuador.

They were pulling rubble away from one end of the building which had not completely collapsed. The reality of human life once being in that building before it was demolished became more evident as I saw a man’s shoe lying in the fragments of the toppled wall.

But what caught my attention even more than the building, or the stench, or the shoe was a young girl, sitting on a wall, propped up against a side of a still standing building across the street. I got our interpreter to come with me to ask her if she needed help. She just shook her head and stared ahead.

She said she had lost her neighbou rs. The building with the stench had been an apartment building. Four stories. As I looked toward the end that had almost completely collapsed, I could detect that the second floor slab of concrete was laying only a foot or two above the ground floor slab. “The couple on the second floor. They were friends of mine. She felt the shaking and got out but he had already gone to bed and didn’t make it.” She nodded toward the end of the building that had not collapsed completely. Then she looked toward the other end. The end where the second floor slab had fallen. “There were about 20 of my neighbors who lived there.” She paused for a while before telling the interpreter, “They were all killed. I knew them all.” 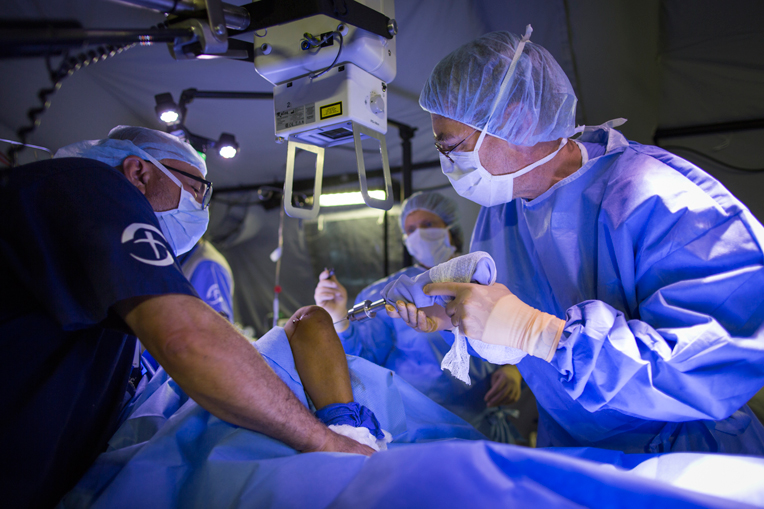 Dozens of surgeries have been performed in recent days at our field hospital in Ecuador.

That night, on the drive back to the Samaritan’s Purse field hospital, we passed through a city that had a five-story building brightly lit by skylights on telephone poles. There were no other lights in the city. We decided to see what was happening. About 100 people stood outside around the side of the building. People had to speak a little louder than normal because of the noise of the generator. One side of the building had completely fallen, leaving a huge rubble pile. There were two huge German shepherd dogs on leashes at the edge of the rubble. Four or five people in hard hats with masks covering their faces were removing pieces of rubble off the top of the pile. Off to each side were two more groups of men passing pieces of rubble to each other. They were trying to clear the pieces of cement and steal away from the middle of the pile. “They think there are three bodies under there. Alive.” 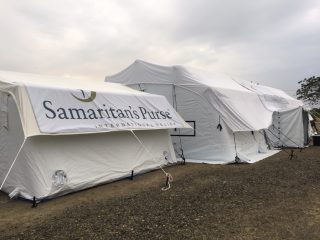 One of the observers began telling us what was going on. The men up on the rubble pile adjacent to the remains of the cracked standing building, were trying to remove enough rubble to see if they could find any sign of life down below. They were part of a search and rescue team looking for the possibility of buried life. Hours ago, the dogs had begun barking as they walked across the top of the rubble. We were told the rescue team had some type of machine that could detect heart beats, and they thought they had picked up three separate heart beats buried below. They had brought an ambulance to the scene but we asked the doctor in charge where they would take the injured. There was no working hospital that had a respirator or an operating room or the needed equipment to care for such injuries. Most likely broken legs, arms, and ribs. Only a clinic. The doctor became excited when we informed him of our field hospital with operating tables and anesthesia and oxygen. Specific instructions were given as to the exact location. 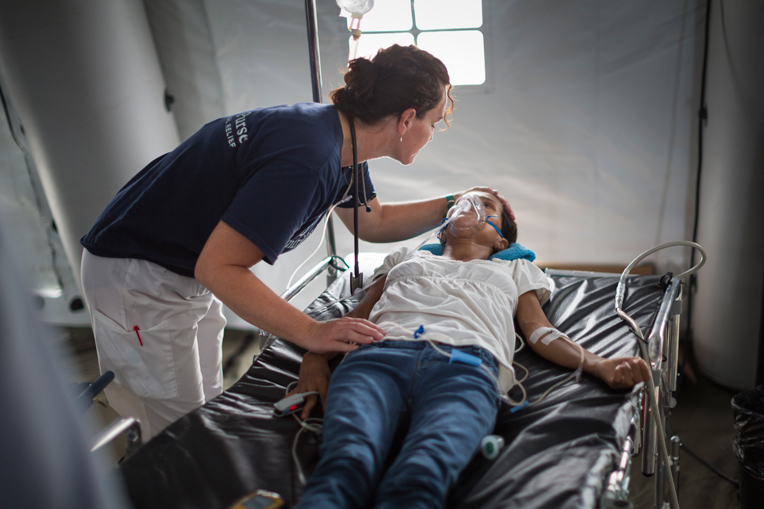 We watched them work for about 90 minutes and then, all of a sudden, one of the team members waved his arms and yelled for everyone to get quiet. Evidently, they were at a point where someone thought they heard something in the rubble. Maybe breathing, maybe a groan or a cough. All that ran through my mind. Within moments, not a sound was made. The whole crowd stood silently awaiting. We watched and waited and prayed. But then a sensation I will never forget occurred. It was a soft smooth movement at first, like trying to stand on sloping ice. Then, in a moment, the ground began a strong pulsating shake as everyone began running and screaming. I glanced up at the teams up on the rubble as they also began scrambling down the slabs of concrete and pieces of the fallen building. About 100 yards away, we all gathered. Was all hope gone? Would they go back and look, risking their lives after such a recent event? We waited. They didn’t go back but neither did they leave. Finally we told the doctor in charge of the ambulance that we were going to the field hospital and if anyone were found, we would be ready to care for them no matter what time of day or night. He thanked us again. We were his only hope. 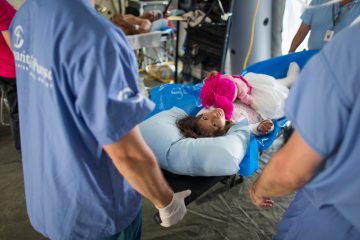 Our medical team members treat the hurting in Jesus’ Name.

Some are killed in the twinkling of an eye. But for the ones who survive, Samaritan’s Purse has developed something to give hope. Not only physical hope but spiritual also. The Samaritan’s Purse field hospital has been in the making for many years, but this is the first major disaster in which it has been utilised. A recently refurbished DC-8 was able to carry the initial part of the hospital as well as staff and medical personnel to put it up. The Ecuadorian army transported the hospital from the initial landing site to a city eight hours away, which had the largest hospital nearest the epicenter. It was where the referral hospital for the area was located. The quake had destroyed their hospital and this was where they wanted us. The first stage of our field hospital, which includes one operating room and emergency room, was in working condition by afternoon of the first day. Two more DC-8 flights carried the remaining hospital and within days, the entire facility was up and running with two operating rooms, and wards for patients. (A fourth flight has since carried down additional materials for the hospital.)

No other organisation has such a field hospital in Ecuador. Samaritan’s Purse is their only hope for such care for the sick and injured. When we leave, the hospital will stay because that will be the only hospital they will have for months or years to come. 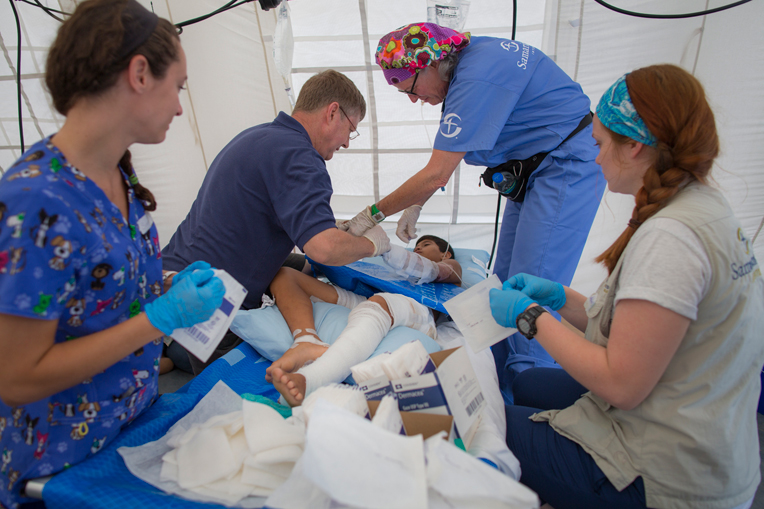 Our doctors and nurses are hard at work in Ecuador following a major earthquake and its aftershocks.

The main theme Samaritan’s Purse has with its medical outreach is that we are interested in the injured’s physical health but even more so in their spiritual health.

Faith, hope and love. The greatest is love, but the Lord uses Samaritan’s Purse to give hope to victims of disasters as we have seen in Ecuador.