Samaritan’s Purse has met the post-earthquake relief needs of thousands of Ecuadorians for clean water, shelter, and medical care during the past two months. We are leaving the mobile hospital in Chone, so Ecuadorian physicians will be able to provide medical care while the town’s hospital is rebuilt.

On 20 June , Samaritan’s Purse turned over ownership and operations of our emergency field hospital to Ecuador’s Ministry of Health. Our medical advisory group stayed there until the end of June.

The Chone hospital, severely damaged by April 16’s 7.8-magnitude earthquake, had been a regional referral hospital. Since the Samaritan’s Purse field hospital opened in Chone on  21 April, it has served as a referral hospital for trauma cases. 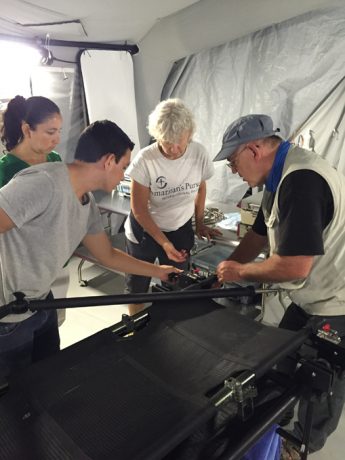 Jim Moore (right), Samaritan’s Purse technical support supervisor, goes over the functionality of the equipment in the emergency field hospital. He helped with the transfer of the mobile unit to Ecuador’s Ministry of Health.

“We weren’t only meeting post-earthquake trauma needs, we’ve been in place to treat surgical cases that have happened since the earthquake, such as appendicitis, which can be fatal if not treated right away,” Jason Edgerton said. He serves as the Samaritan’s Purse regional director for Latin America and the Caribbean.

“In its first deployment, the Samaritan’s Purse field hospital cared for hundreds of trauma patients with earthquake-related injuries, as well as falls, motor vehicle crashes, and gunshot wounds,” said Dr. Michael Cheatham, chairman of the Orlando Health Surgical Group. A Samaritan’s Purse board member, he served at the Ecuador field hospital in early May.

“The hospital and its staff, with relatively limited resources, provided a level of care equivalent to that of a major trauma centre,” he said. “Despite the critical nature of many patients, God provided the equipment and resources needed to effectively care for each patient.”

Emily Arneson, who worked as a nurse in the field hospital for two weeks in May, agreed. “God’s provisions were perfect at the moment we needed them.”

“When we had traumas, God provided us with a trauma surgeon,” she said. “When we had endless orthopedic injuries, we had two orthopedic surgeons. When we had a man with a massive open infection inside his abdomen, there was a doctor available to open him up to clean out his abdomen and stop the infections.”

“It was touching to see the family interaction,” Bransford said. “Someone from the family would always be by the side of their injured family member, staying there all night.” 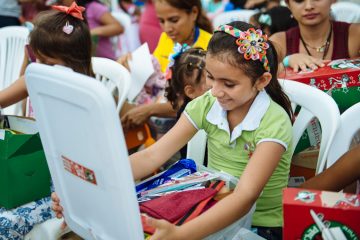 A child of one of the patients at the Samaritan’s Purse emergency field hospital smiles as she opens her shoebox gift. Samaritan’s Purse and local ministry partners held an Operation Christmas Child outreach event on 1 June, International Children’s Day, for 580 children.

Samaritan’s Purse and local ministry partners reached out to those families on International Children’s Day, 1 June, through an Operation Christmas Child event. A total of 580 children of emergency field hospital patients received a shoebox that contained school supplies, hygiene items, and toys.

Samaritan’s Purse also has provided clean water to 50,000 earthquake victims in Ecuador and met the shelter needs of 5,000 households.

Staff and local partners distributed more than 9,000 tarps, 6,500 hygiene kits, and 4,400 household water filtration units. In addition, they installed a water filtration unit at the hospital in Jama and constructed latrines at an internally displaced persons (IDP) camp.

GETTING THERE WHEN IT COUNTS

Samaritan’s Purse deployed its mobile hospital on 20 April, only four days after the deadliest earthquake to strike Ecuador since 1987 killed 660 people and injured 4,600 others.

Samaritan’s Purse airlifted a part of the mobile hospital, as well as members of its medical response team, to Ecuador on the inaugural flight of its DC-8 cargo plane. The DC-8 completed a total of five airlifts of medical equipment, personnel, and disaster relief supplies to Ecuador.

“This plane and this hospital give us even more capacity to respond in Jesus’ Name around the world,” Samaritan’s Purse President Franklin Graham said.

An operating room and emergency room were up and running by the end of the day on 21 April, in a span of just under 11 hours. 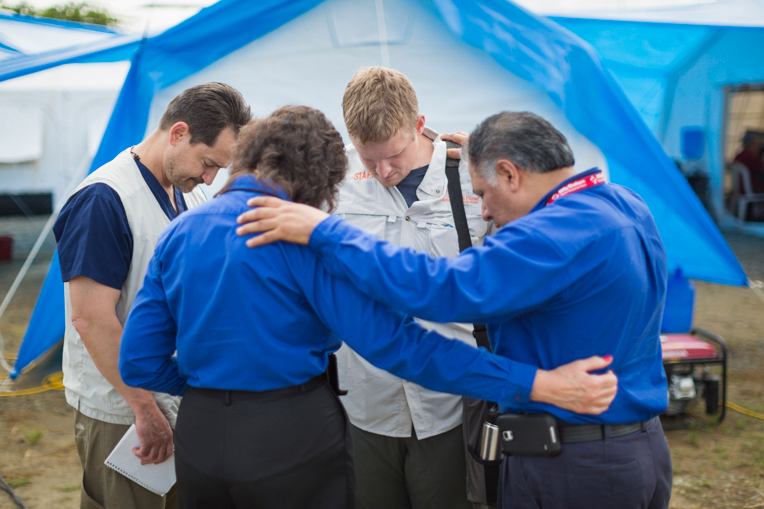 “Getting on site and operating as quick as possible is the most important thing we do in disasters,” said Dr. Elliott Tenpenny, emergency medicine specialist with Samaritan’s Purse. “People typically live or die in the first few days and if you arrive late, you miss the window for treatment.”

Getting treatment for a severe infection was a matter of life and death for a patient named Diane, said Dr. Lance Plyler, medical director of the Samaritan’s Purse international disaster response unit. A laceration on her leg from a motorcycle accident had become infected. The infection had spread throughout her body, leaving her on a ventilator and close to death, Plyler said.

Though doctors had to amputate her leg, “We were able to provide her with critical care that saved her life,” Plyer said. “I’m very proud of our medical staff. They provided her with a level of intensive care as good as she would have received had it been a regular hospital.” 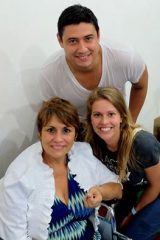 Emergency field hospital patient Diane (left) and her son, Jimmy, express their thanks to nurse Maranatha Weeks from Canada.

Moved by the compassionate care Diane received, her son, Jimmy, decided to trust Jesus as Lord, Plyler said. Diane’s own faith in Christ was strengthened too as a result of the witness of Samaritan’s Purse staff. Jimmy is among 60 patients, family members, and local medical professionals who made professions of faith in Jesus Christ at the field hospital.

Ecuadorian physician Dr. Mabel Lojan helped coordinate logistics among local entities for the field hospital. As she worked shoulder-to-shoulder with the team members, she wondered how they were keeping their spirits up. They seemed to have renewed energy each day, she said.

She started to hear the medical personnel talk about the grace of God, when a patient’s condition improved or when supplies arrived exactly when they were needed.

Then, after attending a funeral for someone who had succumbed to their injuries, Lojan talked with a fellow physician about God’s sovereignty. 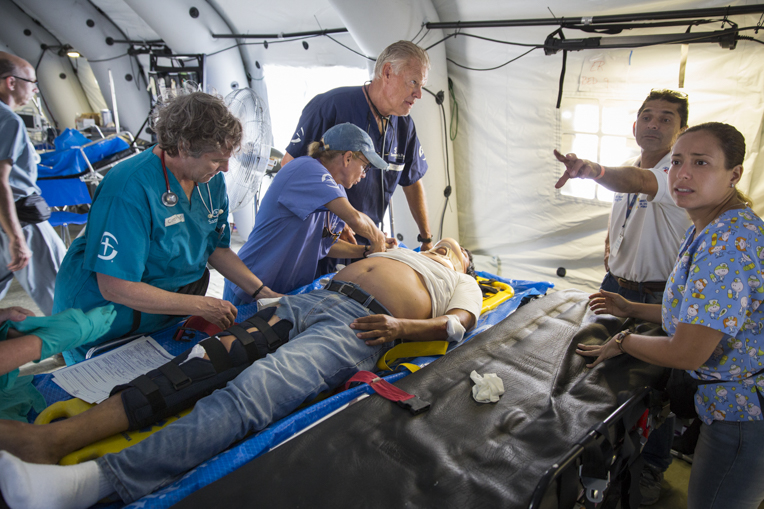 Staff at work in the field hospital in Chone, Ecuador. Mabel Lojan is at far right.

Realising that only God has the power over life and death, Lojan decided to place her faith in Jesus Christ.

“I’m learning that God is in control,” she said. “I’m a perfectionist and want to control things, but I’m learning to look to God for direction.”

Pray for Mabel Lojan as she seeks God’s direction in her life.

Pray for Diane as she continues to recover from her injury. Pray for her son, Jimmy, a new Christian, to grow in his faith.

Pray for the Ecuadorian medical personnel who now have oversight of the emergency field hospital, that God will provide them continued wisdom and stamina to meet the medical needs there.