Delivering Christmas to Children in Uganda

In late 2002, Franklin Graham gathered with musician Bono (of U2) and the Brooklyn Tabernacle Youth Choir at New York’s JFK International Airport for a special send-off. More than 80,000 Operation Christmas Child shoebox gifts were loaded onto an Antonov 225, the world’s largest cargo jet at the time, to be transported to Ugandan children suffering with HIV/AIDS. 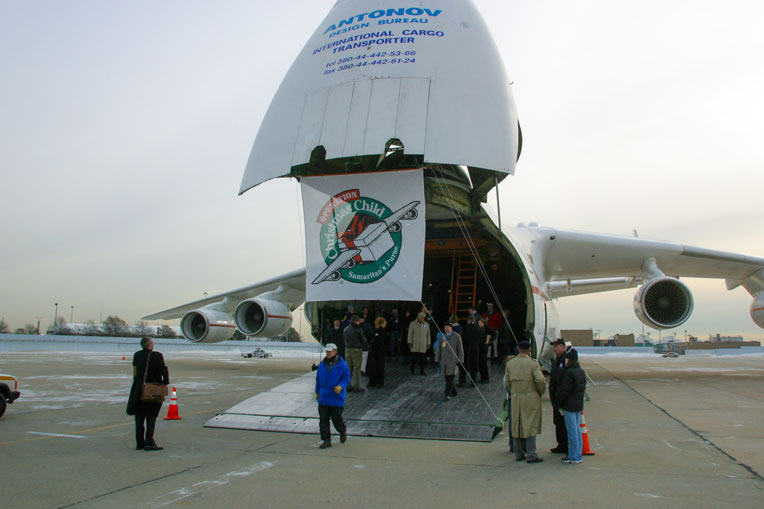 We chartered a jumbo jet to deliver the shoebox gifts to Uganda.

Lesley Clementi, a 12-year-old who was born with HIV, addressed the crowd on the tarmac. She had packed one of the shoebox gifts in that shipment in order to bless a child in a situation similar to her own.

In Uganda, 9-year-old Emily Nannyanjo received Lesley’s carefully packed gift that included this heartwarming note: “I want to let you know I care for you and I always will, no matter what happens in our lives. You’re always going to have a friend. All you need in life is one, and here I am. If you ever have a problem or fears, turn to Jesus and He will help you.”

Emily, like the rest of 80,000 Ugandan shoebox recipients with HIV/AIDS, didn’t know if she’d see another Christmas, but that year, she experienced joy and a tangible expression of God’s love for her.

Janet Museveni, the First Lady of Uganda, helped distribute shoebox gifts to her young citizens. “I thank God so much for people like Franklin Graham and Samaritan’s Purse—people who listen to God and allow their hearts to be broken by what breaks the heart of God, and who make themselves willing disciples to bring laughter and happiness to these children,” she said.

To date, more than 1.8 million Ugandan children have received a gift-filled shoebox, nearly 550,000 of whom have participated in our follow-up discipleship program, The Greatest Journey.

Uganda is just one of more than 100 countries where we have distributed a total of more than 178 million Operation Christmas Child shoeboxes.