Travel from the town center of Chardonnieres, Haiti, to the region’s remote areas required our medical teams to travel hours by foot up difficult roads. Headed in the opposite direction, men, women, children, and the elderly passed by on foot or on the backs of donkeys, telling us in Creole: “We have problems. People are dying.” They were fleeing their villages ravaged by cholera. 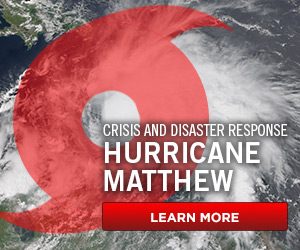 This area on the southern tip of Haiti’s southwestern peninsula is only accessible by four-wheel drive vehicle along washed-out roads and multiple river crossings. This has caused large-scale relief to be slow in coming, which leaves residents susceptible to waterborne illnesses, such as cholera—a gastrointestinal bacterial infection that causes dehydration due to vomiting and diarrhea and can kill in in a matter of hours.

Cholera is endemic in Haiti, meaning that it’s present in the population but not always apparent. Hurricane Matthew has destroyed access to clean drinking water in many places, leaving cholera-contaminated water as the sole alternative for thousands.

About 200 cases have been reported so far, but, with information about infections slow to arrive, those numbers are expected to grow significantly.

Our Cholera Treatment Center is up and running in Chardonnieres to diagnose and treat the disease and to assess needs in other areas.

The first of our three planned cholera treatment clinics is operating in Chardonnieres to diagnose patients and treat the disease as needed. We have seen over 100 patients so far. Intravenous fluids and education about sanitary water sources should help prevent the spread of cholera, which might—if unchecked—grow to epidemic proportions.

“A cholera patient can lose significant amounts of fluid, as much as 20 liters per day,” said Dr. Lance. “But it’s really not very hard to treat. The mainstay of therapy is fluid and electrolyte replacement.”

Coming Back to Life 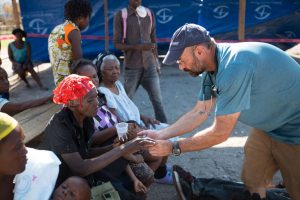 Treating patients at the cholera clinic.

Many patients who arrive at our CTC are carried by friends or on motorcycles because they are too weak to walk. Gaunt and lethargic from fluid loss, patients will begin to improve within a few hours of receiving IV fluids.

Thanks to early intervention, Jean Emilue Saintil will not have to leave behind a family of six children.

“I was scared, because I thought I was going to die,” the 56-year-old patient said. “Without you I would be dead.”

Cindy Uttley, Director of Community Health for Samaritan’s Purse, responded to the cholera outbreak following Haiti’s 7.0-magnitude earthquake in 2010. “If you’ve seen cholera, it’s not something you’ll ever forget,” she said.

More doctors, nurses, and supplies arrived in Chardonierres recently to increase our capacity in light of what our assessments are revealing throughout the region. 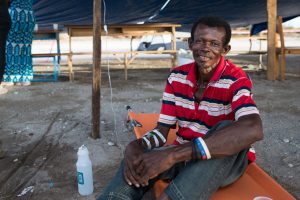 Jean Emilue Saintil came to our cholera treatment center with dangerous fluid loss. After more than a day of IV fluids he was restored to health.

Many of the team are seasoned veterans, having worked in our Liberia Ebola clinic, the Haiti earthquake, and the recent earthquake in Ecuador.

Holding down full-time roles in hospitals and practices, these highly-skilled medical professionals also make themselves available for multi-week deployments to serve in Jesus’ Name.

“This doesn’t feel like work,” said Suzanne Jones, a nurse practitioner who recently moved to the Dominican Republic, only a short flight away from Haiti. “I would do this every day if I could.”

The efforts of our team are having a spiritual impact on the surrounding community. “I think people will be more prone to hear the Gospel,” said Rich Francois, a local Haitian Christian. “I think that from this act of love, they [the community] will be more responsive when we talk about the love of Jesus Christ.”

Please continue to pray for Samaritan’s Purse staff and volunteers as we address critical needs in areas devastated by Hurricane Matthew.