A disaster assistance response team from Samaritan’s Purse is in Rwanda to provide relief in Jesus’ Name to refugees from Burundi. There are between 32,000 and 35,000 people in Mahama Refugee Camp, and approximately 17,000 more refugees will arrive in the next two weeks from smaller camps scattered in the surrounding areas.

This barren land outside Mahama Refugee Camp will be used by local Christians to build a church and distribute items to refugees. One item the refugees need is firewood, as this land doesn’t have any trees for use. Samaritan’s Purse is currently supporting the needs of the local church.

Alongside the local church, Samaritan’s Purse held a ceremony with the community adjacent to Mahama refugee camp to share the Gospel and announce a plan to construct a church in the area. The first service was held at the church on Sunday, and dozens of people gave their lives to Christ. Over the weekend, we also worked with the local church to distribute 504 bars of soap to Burundian refugees living in the community outside the refugee camp.

During April and May, political conflict in Burundi erupted into deadly violence causing tens of thousands of residents to flee to neighbouring countries, including Rwanda, Tanzania, Uganda, and the Democratic Republic of the Congo. As instability in Burundi continues, the number of refugees in the region has now climbed to more than 175,000 people. Our team is prepared to ease the suffering of refugees by meeting medical, shelter, and water/sanitation needs. 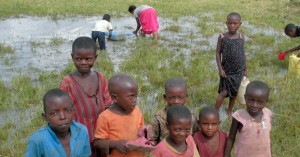 Burundian children are fetching water from a pond formed by the leakage of a pipeline in a settlement area in Uganda.

The crisis in Burundi began in April when President Pierre Nkurunziza announced he would seek a third term in office, despite questions about its constitutionality. In the aftermath, there has been a coup attempt, demonstrators have been killed, and an opposition leader was assassinated. The security situation remains unstable.

Our field staff in Uganda has been providing food assistance to Burundian refugees in the southwestern part of that country since May. Staff members are now planning to expand that assistance to cover water, sanitation, and hygiene needs as well.

Please pray for our team as they begin to serve refugees in Rwanda. Pray for opportunities to share the eternal hope of Christ with those who are now suffering and displaced.