An Iraqi father’s concern for his children’s future

Ala is 38 years old and a native of Mosul. When ISIS attacked Mosul in 2014, Ala, his pregnant wife, Ishraaq, and their two young children, Mohammed and Sudra, were trapped. Life under ISIS was unbearable. Forced to dress in formal clothes, to grow his beard and never to listen to music, Ala found a way to escape by driving into the countryside and putting on his favourite playlist whenever he could.

To make ends meet, he bought a generator as the electrical grid was so unreliable, and received payments from neighbours in return for supplying electricity.

Things took a turn for the worse though when Ala’s cousin was brutally murdered by ISIS. He was shot in the head; his crime was that he was a doctor who was caught helping soldiers from the Iraqi army when they were wounded. Ala’s heart was broken and he will forever now speak out, unafraid of the consequences, defiant because of what happened to his cousin. 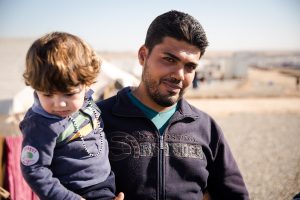 Ala holds his youngest child who was born with a heart defect.

During this time, Ala’s third child, Abdullah, was born with a heart defect and they were unable to get any care in Mosul. This was a grave concern for the couple.

On the 22nd of October 2016, the area of eastern Mosul where they lived was liberated and Ala quickly drove his family out of Mosul towards Erbil – they were finally free. But what about the future?

At the moment that consists of living in a tent alongside 10,000 others and preparing for winter with his young children. Through Samaritan’s Purse and the World Food Programme they receive a monthly ration of wheat flour, rice, chick peas, lentils, sugar and oil. This constitutes enough for this young family to get by on. 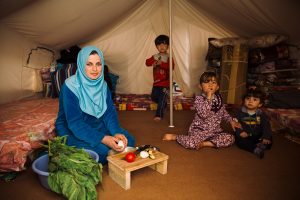 Ala’s wife prepares food as the children play behind her. The family received food aid from Samaritan’s Purse and World Food Programme.

But there is still no medical care for Abdullah who is now 16 months old, and Ala and Ishraaq live with a constant feeling of concern for their son’s heart and well-being. The future, and where they will settle, remains unknown, and represents an additional burden. To return to Mosul is out of the question. There they have witnessed horror and death, been betrayed by close neighbours and don’t know who to trust any more.

Ala still says though that he is hopeful for his children and for their future and that he has a plan in his mind for them although he is afraid to tell us what it is. Please pray for this family, and the tens of thousands of others who are in similar circumstances.

Ala’s older two children, Mohammed and Sudra, play together in the family’s makeshift home. Please keep them, and all of Iraq’s children in your prayers.

Watch a video of Ala’s family